The Guild of Young Freemen maintains close relationships with many of the Livery Companies of the City of London, from The Great Twelve to the Modern Liveries. Through this, our members are afforded a privileged look into the unique traditions and history of the Livery movement.

A core aim of the Guild is to assist our members in finding and joining a Livery (or Liveries!) that best suits the individual member; a great many of our members belong to The Financial Services Group of Livery Companies, as these companies are directly involved in the modern professions found within the City, but others belong to those Companies that they have a familial link to or have a particular interest for outside of their profession.

A Brief History of the Livery Companies

The Livery Companies trace their origins back to the medieval guilds which grew over time as they accumulated skilled members and wealth, and became corporations under Royal Charter – given status by the monarch – responsible for the regulation and training within a particular trade. Members of a corporation could trade within the City without incurring certain taxes, and being an apprentice to a member would provide the foundation to a long career in the City.

In 1515/16 an order of precedence for the forty-eight Livery Companies was established based upon the economic and political power they wielded at the time, and from this the Great Twelve emerged; the then twelve most powerful companies in the City. Any new companies would then be added to this order as they were created.

With the advent of new professions over the years, so too have new Livery Companies been created – from the Basketmakers’ Company (number 52) to the Gunmakers’ (number 73) and Information Technologists’ (number 100), there are currently 110 Livery Companies with several more Guilds pushing towards achieving their Livery status. As society has changed over the years so too has the purpose of the Liveries. The government has almost entirely taken over the regulation of most professions and provision of qualifications, and many of the trades the ancient Livery Companies represented have all but ceased – we no longer light our homes with tallow candles, after all. Now, Livery Companies dedicate their time and considerable wealth to charitable work, supporting the armed forces, and providing training through government-approved schemes, as well as maintaining their role in civic life in the City of London.

As an organisation within the City of London, the Guild of Young Freemen takes immense pride in being closely involved in the civic affairs of the City – ranging from sending our Livery-affiliated members to Common Hall to elect the City Sheriffs to our participation in key occasions in the civic calendar. A particular highlight for our members is the Lord Mayor’s Show, taking place after the election of the new Lord Mayor, when a great parade takes place through the streets of the City celebrating the pageantry of the Liveries and the incredible diversity of organisations within the City. From City-affiliated units of the armed forces to schools, charities, and corporations that call this great City their home. During this event the Guild parades with the Basketmakers, acting as marshals for Gog and Magog – the ancient Roman guardians of the City. 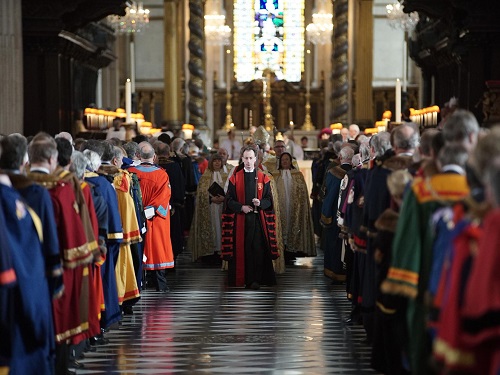 Other events that the Guild takes part in include the United Guilds’ Service at St Paul’s Cathedral, which dates back to the end of WW2 when it was decided that – to keep up the morale of the City – the Guilds and Liveries should don their finest robes and parade into the cathedral with a service celebrating the fortitude of spirit shown by Londoners after the Blitz; a bold flash of colour through an otherwise bleak period of reconstruction.